The History of Fayetteville Academy
“Futura Est In Praesentia”

In 1969, a group of dedicated men and women had the commitment and passion to create a premier, independent, college preparatory school that would embrace “The Three A’s”–Academics, Arts, and Athletics. This dedicated group of trustees seized the moment and recognized “Futura Est In Praesentia,” and their vision and quest for excellence became the foundation for Fayetteville Academy. In selecting the name Fayetteville Academy, it was the hope of the original board to create a school that would distinguish itself as a leader in private education as the original Fayetteville Academy had done.

Thus, in September of 1970, under the leadership of the first headmaster, Mr. Joseph Lassiter, Fayetteville Academy 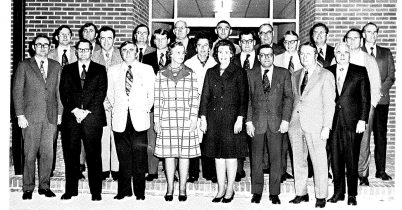 opened with approximately 100 students in grades 1-10. During the first year, the entire school was housed in what is today the Lower School. The following year the gym would be built and named in honor of Mr. Oscar L. Norris, the Chairman of the original Board of Directors. In 1972, the Upper School addition was completed to accommodate the first graduating class. In the spring of 1973, the former Lafayette School merged with the Academy. During the following school year, two campuses were maintained while the Middle School building was being completed. That same year, the gymnasium building was enlarged to include a lunchroom and more physical education facilities. Between 1973 and 1975, a baseball field, soccer field, and track were constructed. In 1979, the Barbour tennis courts were built. In 1981, the administration and media center buildings were completed, and in the fall of 1993, the Jones Science and Math Center was added. The new gymnasium and Jordan Soccer Field and Physical Fitness Center were completed in 1997. In 2001, the Alumni Center for Fine Arts opened and provided outstanding facilities for the art, choral music, and band studios.  Also in 2001, the Lawing Baseball Complex became a reality. The Wood Technology and Learning Center was opened in the fall of 2002, and in 2004, the Kishbaugh Center for Writing and Creative Learning was created as a living legacy to Ryan Patrick Kishbaugh.

Today, with enrollment of approximately 390 students and a staff of 65, the school is guided by Head of School, Ray Quesnel, and Chair of the Board of Trustees, Josh Barkman. Fayetteville Academy takes pride in its history, while at the same time continues to embrace the ideas of the original founders and their passion and commitment to“Futura Est In Praesentia.”