Mr. Andrews joined the faculty of Fayetteville Academy in 2009. He has studied instrument music and played the French horn since the 5th grade. His mother a cellist, and father a trombone player, are both musicians who instructed him from an early age. Mr. Andrews played the horn in a church brass group until the 9th grade when he joined his first school band, and was hooked.

He went on to study music in college at Tennessee Temple, and the University of Tennessee at Chattanooga. It was there he met his wife, Yvette, who is a trombone player. Mr. Andrews and his family moved to Fayetteville in 2001. They have six children and 9 grandchildren.

In 2006, Mr. Andrews, his wife and another family met to form the Fayetteville Community Band which later was renamed the Fayetteville Symphonic Band. The band still meets at Methodist University every Monday night, and gives regular concerts throughout the year.

Mr. Andrews enjoys watching others discover the richness he has found through discipline of learning to play an instrument. Mrs. Cogswell has been a renowned music teacher and performer for over 40 years. She has a Bachelor of Music Education with Piano Principal degree from Florida State University and has completed graduate studies in piano performance at Meredith University. She holds certifications in both Kindermusik and Musikgarten. Mrs. Cogswell has extensive teaching experience, ranging from church youth choirs to individual lessons to music camps and academies. She still serves as Director of the Snyder Music Academy and teaches Kindermusik once a week to children at the Fayetteville Metropolitan Housing Authority. Mrs. Cogswell enjoys teaching a few children at home for private piano lessons. Ms. Reavis, known by her students as D. Rev, holds a B.S. in Art Education (K-12) with a concentration in painting from Appalachian State University. She is the Fine Arts department chair and teaches all visual art classes for students in grades 8-12. She has been teaching since 1993 and has been at the Academy since 1999. Ms. Reavis sponsors the FA chapter of the National Art Honor Society, teaches after school enrichment classes, private lessons, and conducts camps for FA’s Summer Odyssey program. She is a member of the National Art Education Association, NC Art Education Association, and the SCBWI Carolinas Chapter (Society of Children’s Books Writers & Illustrators). Ms. Reavis is a practicing artist and her work can be found at Lisa’s Custom Framing in Fayetteville, N.C.; she has shown her work locally at Ellington White Gallery, and the Arts Council. 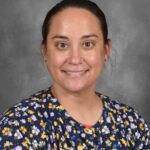 Phone: 910-868-5131, ext. 3401 Areas:
1st Grade
2nd Grade
3rd Grade
4th Grade
5th Grade
7th Grade
Arts
Kindergarten
Lower School
Pre-Kindergarten
After studying Foundations and Illustration at the Savannah College of Art and Design for two years, Mrs. Reeves earned a Bachelor of Fine Arts with a concentration in Painting and Drawing from East Carolina University, as well as a Master of Arts in Teaching with a concentration in Art Education from UNC-Pembroke.  She teaches Art to grades Pre-K through 7th grade.  She has been teaching since 2005, and she has been at the Academy since 2014. Mrs. Reeves is also the co-founder of Care’s Coasters, an active art-based charity in memory of her twin sister Caroline, as well as illustrator of the independently published Tristan Trapp book series, authored by Martha Goetz.
Mrs. Reeves’ websites:
www.reevesartworks.com
www.carescoasters.com